U-Boot Beton® is a recycled polypropylene formwork that was designed to create two-way voided slabs and rafts. The use of U-Boot Beton® formwork makes it possible to create mushroom pillars, with the possibility to have the mushroom in the thickness of the slab.
Thanks to the conic elevator foot, immerging the U-Boot Beton® formworks in the concrete casting will create a gridwork of mutually perpendicular beams closed from the bottom and the top by a flat plate that is created with a single casting; this results in considerable reduction in the use of concrete and steel.

U-Boot Beton® is used to create slabs with large span or that are able to support large loads without beams.
Light and quick and easy to position, thanks to their modularity the designer can vary the geometric parameters as needed to adapt to all situations with great architectural freedom.

Among the various foundation types, rafts are one of the most well known. They are used above all in ground conditions with little bearing capacity, or with poor quality soil, large thicknesses must be used which increases the construction cost.
Thanks to the use of U-Boot Beton® lightened rafts can be created with the same performance but at a considerably lower cost.
Once drown in the concrete casting, U-Boot Beton® forms the structure just like two full slabs, with a variable thickness, connected by a perpendicular beam gridwork to form a bidirectional static honeycomb plate.
For this concrete bed, the distribution of weights due to hight inertia is rationalised in order to permit maximum stiffness and lightness for the structure with a minimum amount of concrete, which makes it possible to eliminate, where possible, the foundation piles. 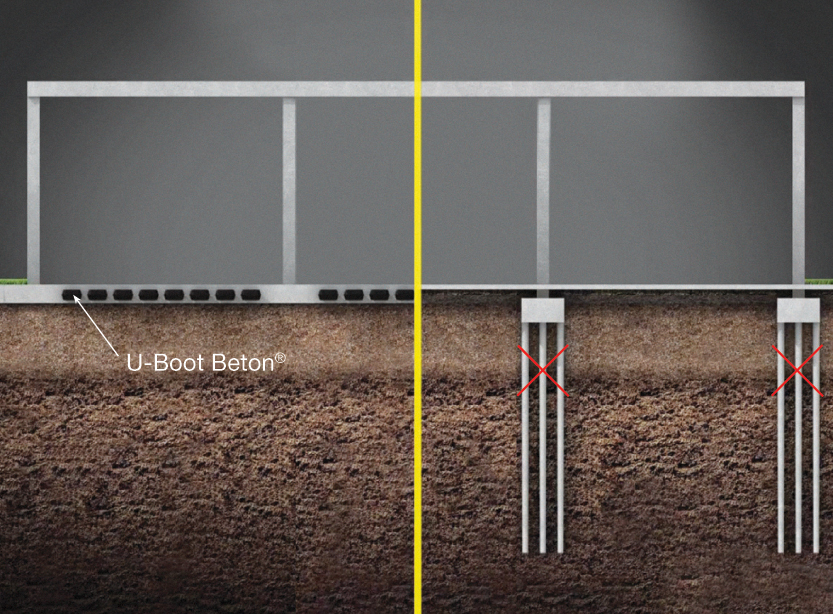